Let’s be honest – while I have the excuse of creating this guide for Patrons of Crushing Krisis to fill in one more missing link on the Fresh Start era page (for her new one-shot, out tomorrow!), we all knew I did it just because I love… 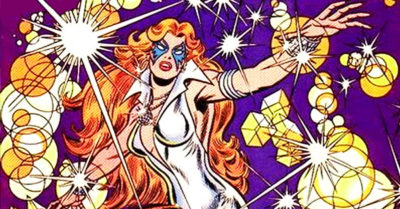 I’ve always loved Dazzler, purely because she was the Madonna of the Marvel Universe back when I was originally a reader (and a Madonna fan) back in the early 90s. However, her run on Uncanny X-Men by Claremont was much too expensive for me to buy as back issues (and, for some reason I never sought out her 1980 series as a lot at a convention).

As with all of my guides for individual heroes who have not anchored their own titles for long, putting this page together was punishing. It would be easy to simply link to Dazzler’s solo stories, or even to list all of her guest appearances in order.

Of course, I had to do more than that. I browsed nearly every Dazzler appearance outside of her solo series to figure out which were the most important! END_OF_DOCUMENT_TOKEN_TO_BE_REPLACED

The Most Wanted Marvel Omnibus Secret Ballot allows collected editions fans to play “Fantasy Collections Department” by picking the runs they’d most like to see in an oversized format.

Now that I’ve recapped the history of past years of the Ballot, we’re up to two weeks of the really fun stuff – thinking up dozens upon dozens of suggestions for Marvel omnibuses we’d love to see on our shelves!

I highlighted 50 runs that deserved an omnibus at the close of the survey last year, but this time I’m going to be a lot more comprehensive.

I’ll begin on my home turf: The X-Men. It’s how Crushing Comics guides began, and I own every issue of X-Men in either single issue or collected format, so I’m accutely aware of the gaps in oversized content.

Today I’ll cover both existing and potential Omnibuses for X-Men from their debut in 1963 through the launch of X-Men, Vol. 2 in 1991. Then, tomorrow we’ll look at the tumultuous and under-collected 90s, before finishing up on Wednesday with the pair of most recent X-Men eras – from Grant Morrison’s New X-Men in 2001 through present day.

After that, we’ll rinse and repeat this exercise in reverse for the entire Marvel Universe, working backwards from the current All-New All-Different Marvel to look at the top possible omnibuses across the entire line from every period until we’re back to the few books still left uncollected from the 1960s.

So, if you haven’t yet voted in the poll or just need a few more books to fill out your personal Top 20, get ready – the next two weeks of CK will have over 100 omnibus suggestions for you to choose from!

There are 19 potential omnibus volumes in this material! Collected Edition mapping can be exact and contentious work, so if you have a correction or disagreement don’t hold back – sound off in the comments below!

END_OF_DOCUMENT_TOKEN_TO_BE_REPLACED

Want to learn more about the Marvel Omnibus editions that already exist and the issues they cover? My Marvel Omnibus & Oversized Hardcover Guide is the most comprehensive tool on the web for tracking Marvel’s hugest releases – it features every book, plus release dates, contents, and even breakdowns of $/page and what movies the books were released to support. END_OF_DOCUMENT_TOKEN_TO_BE_REPLACED

A week into this countdown and accompanying annotation and we’ve finally reached the Top 20 Most-Wanted Marvel Omnibuses from the 2016 Secret Ballot by Tigereyes. I covered #25-21 in the last installment.

This installment includes two books of fan-favorite material, a long shot second volume to an orphaned first, the long-ignored origin of a hero who has two films to his name, and the highest-ranking vote from my own ballot! There’s a solid chance I would buy all five of these books.

If you have any extra information to add about the probable runs or opinions to share about the comics therein, please leave a comment! Even when it comes to X-Men, I don’t know (or remember!) everything about these books – and you might.

Do you own an oversized tome of your favorite character’s comic books? My Marvel Omnibus & Oversized Hardcover Guide is the most comprehensive tool on the web for tracking Marvel’s hugest releases – it features details on every oversize book, including a rundown of contents and if the volume is still readily available for purchase. END_OF_DOCUMENT_TOKEN_TO_BE_REPLACED