And now, let’s dig into #6 and #5! END_OF_DOCUMENT_TOKEN_TO_BE_REPLACED

There’s only one of these books released each month, so these are the big bombshells from the announcements. END_OF_DOCUMENT_TOKEN_TO_BE_REPLACED

Today I’ve got numbers #35 through 30 of the Most-Wanted Marvel Omnibus secret ballot by TigerEyes. I covered #40-36 in the last installment.

This group of contenders are all returning Top 50 votes from last year’s survey save for one, which weirdly has vaulted onto the survey after being collected for the first time (usually that sort of thing takes the edge off of people’s desire for an omnibus).

Do you own an oversized tome of your favorite character’s comic books? My Marvel Omnibus & Oversized Hardcover Guide is the most comprehensive tool on the web for tracking Marvel’s hugest releases – it features details on every oversize book, including a rundown of contents and if the volume is still readily available for purchase.

Here we go with #35 through 31! END_OF_DOCUMENT_TOKEN_TO_BE_REPLACED

One of my favorite comic community happenings of each year is when a message board member named TigerEyes announces that it’s time for the “Annual Secret Ballot: Marvel’s Most-Wanted Omnibus.”

For the uninitiated, what this means is that over a hundred of the biggest Marvel fans and collectors who like to chat each other up on the internet send in their picks for what Marvel material is most worthy of compiling into an oversize Marvel Omnibus Edition, massive tomes that sometimes run over 1,000 pages and up to 50 issues of collected comics.

Whether it’s causation or correlation, books from the secret ballot tend to get printed by Marvel. Here’s the breakdown from the first three years of the survey:

That makes the secret ballot not only a fun exercise, but a useful straw poll to get an idea of what could be coming our way. In fact, the majority of omnibuses released in 2016 that are not from the past three years of comics are from the poll.

I’ll be tackling the results of the 2016 poll starting with this post, complete with likely contents, explanations, how to read the material right now, and the likelihood we’ll ever see the books in print.

Let’s get started! And, if you want to know more about all of the books that have been released to date, my Marvel Omnibus & Oversized Hardcover Guide is built on a database full of all of the information about these massive tomes so you can sort and filter them. It’s the only tool of its kind on the web!

END_OF_DOCUMENT_TOKEN_TO_BE_REPLACED

The definitive, chronological, and up-to-date guide and trade-reading order on collecting Fantastic Four comic books via omnibuses, hardcovers, and trade paperback graphic novels. A part of Crushing Krisis’s Crushing Comics. Last updated November 2019 with titles scheduled for release through May 2020. 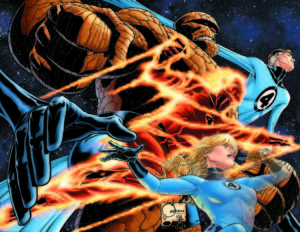 There are hundreds of different collections of Fantastic Four, especially their original run from 1961 to 1996. However, there are a few specific formats of books that cover large portions of this title, and I’ll cover those first – Essentials, Epics, Masterworks, and Omnibuses.