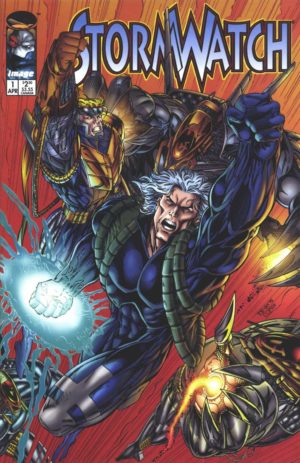 This run finds Stormwatch disintegrating without Battalion as the glue to hold it together. No one seems especially interested in obeying Synergy unless it suits them, and Diva has only marginally better luck. That lends an extra layer to Timespan’s egging Battalion on to his death – maybe the real goal was to destroy Stormwatch, and the only way to do it was to convince Battalion that he was fated to die?

Writer Ron Marz is still ably steering this ship towards certain doom and he’s now managed to differentiate the voices of the entire cast. Despite that, this run lacks the urgency of any prior portion of Stormwatch. It feels like a mismash of loose ends being tied up and chess pieces being maneuvered.

It’s hard to put a finger on why. Is it the lack of Battalion as our main point-of-view character leaving the book to feel adrift? Or, is it that with the future already glimpsed in #25 that the motion of the pieces to their appointed destinations feels too slow, and the side stories feel too unimportant? Diva’s encounter with Argos especially feels pointless, and Winter’s Russian adventure is a complete redux with little to improve upon the prior version. I suppose all will be revealed soon enough.

On the art side, this is also the weakest portion of the book so far. An amalgam of pencillers on Stormwatch #17 makes for the weakest art on the book to date, though they could afford the soft spot on an all-talking issue. #19 is back to all Mat Broome and looks strong.

Issue #21 is from fill-in from Terry Shoemaker, a Marvel fill-in artist, and it’s great! I always expect fill-in artists to leave us with an issue of big muscles and gawky faces, but he does a terrific job on keeping Winter, Cannon, and Bendix distinct in the midst of a lot of action. (I checked ahead, and he’s the artist of Zealot’s mini-series – I’m psyched!)

Stormwatch Special #2 plays out effectively as #20.5, showing what Stormwatch Prime is up to after their side mission in #20 – and addressing the subplot of their manipulation by Defile via their captor, Deathtrap. Of course, we all understood that was happening already, so this issue brings nothing new to the table with some wildly inconsistent art that’s far outside of the WildStorm house style. All you need to know is that Flashpoint may have finally shaken loose the subliminal programming that made him an effective mole (but it hasn’t stopped him from being an asshole), but Sunburst and Nautika are as deep as ever!

Also, in reading WildStorm Rarities yesterday, I realized it contained a pair of Stormwatch stories drawn by Jim Lee that I should have read earlier in the month! (Sadly, we never get more than a tiny glimpse of Lee’s Diva, but his Battalion is massive.)

Want the recap? Keep reading for the details of how our team is inching ever closer to their doom. Here’s the schedule for the rest of this month’s WildStorm re-read. I’m not looking forward to the next two days – another mercifully short trip through Backlash for #6-7 a new arc on Deathblow #13-15. Then we’re so close to WildStorm Rising!

Need the issues? You’ll need to purchase single issues – try eBay (#17-20 & Special #2) or Amazon (#17, 18, 19, 20, 21, Special #2). Since further series reached these same issue numbers, be sure to match your purchase to the cover images in this post (and, note that #21 was misnumbered simple as “1” on the cover). The two older stories were only ever reprinted in WildStorm Rarities (Amazon / eBay), a perfect-bound book with a spine.

And now, onto the story! END_OF_DOCUMENT_TOKEN_TO_BE_REPLACED