One of the critical stops on every one of our trips to the zoo is bats. Fruit bats. Insect-eating bats. We’ve even added adorable little vampire bats who live in a dark room and drink blood from a wee little dish.

Perhaps some parents would be slightly alarmed to have one of their toddler’s favorite animals be bats (especially the blood-drinking kind). I’m not, and not just because the first book I ever read was Dracula. No, it’s more that two of EV’s favorite books are the previously covered Stellaluna and today’s book, Nightsong.

Whereas Stellaluna is a story EV loves, Nightsong’s little Chiro the Bat became a persistent character for EV. He is absolutely adorable. She loves fussing over his cheeks and his chubby belly while we read the book. After a few reads, she began to talk about what Chiro was doing randomly throughout the day. In turn, she became even more engrossed in the book, to the point that she could easily recite it for us with the pages for reference.

This forced my hand on allowing the first licensed character into our home, as we discovered there is in fact a stuffed Chiro doll that one can acquire. Every day when EV takes a nap he flies up to a perch on the wall and hangs upside down, and each night he flights down to keep EV company while she goes to sleep.

Nightsong, written by Ari Beck and illustrated by Loren Long 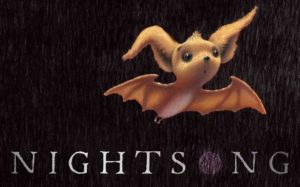 Themes to Discuss: being afraid of the dark, sound waves and echolocation, independence, self-confidence and mastery of skills, predators and insectivores, testing boundaries

Nightsong is a book about discovery and boundaries that is beautiful in every way – from its flowing prose to high-contrast, nearly-3D illustrations to its supple, glossy paper. The warmth and trust between Chiro the bat and his mother provides an awesome opportunity to explain boundaries and when it’s the right time to test and push past them.

Chiro the bat awakens folded in his mother’s wings in their cave home. She explains that tonight is the night he will fly out alone and use his “good sense” to find his way – only to the pond, unless his song is sure. 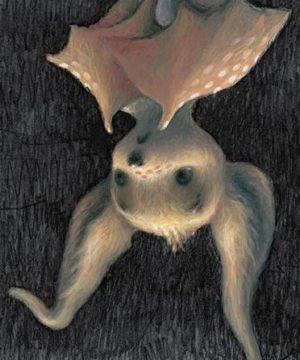 At first Chiro feels scared and disoriented, but when he begins to use his echolocation it lights up the details of the world for him as clear as day. After enjoying a breakfast of bugs, Chiro feels confident enough to keep flying. He explores as far as the ocean when he sees the glimmer of the rising sun and knows it’s time to return home to his mother’s warm embrace.

Of all the wonderful elements of this 2012 picture book, Loren Long’s illustrations are the most noticeable. He draws an animated, three-dimensional Chiro who pops off of the black backgrounds of the pages. The efffect is so uncanny that I was convinced that the book contained some computer-generated graphics until I read up a bit on Long, a mega best-selling illustrator. The flecks of acrylic paint that define Chiro’s face at times suggest the detail of blown up pointilist painting in their minute size and deliberate placement.

Other books I’ve read from Loren Long range from fine to great, but the beautiful prose in Nightsong is truly remarkable. That’s the work of Ari Beck, a YA author, folklorist, and doctor of Comparative Literature and Culture. Beck’s writing is easy to read but not simplified, descriptive but never florid. It possesses a natural rhythm that makes me smile to read it. I never get tired of reading this book – it’s a rare one that I can read daily without complaint.

“Sense is the song you sing out into the world, and the song the world sings back to you. Sing, and the world will answer. That is how you’ll see.”

Out went this song over dark water then, again and again, each wave on the ocean rising up to greet him, each splash of sea foam becoming kin to him.

I am always cautious of books with adorable protagonists who like to misbehave. Even when a powerful moral ensues, it can take a while for it to sink in for a toddler even as they begin to emulate the silly or even dangerous behavior of the character they love.

Nightsong gracefully avoids this problem, although it’s so subtle that on my first few reads I was disappointed when Chiro extended his flight past the boundary of the pond that serves as his insect breakfast bar.

It begin with Chiro’s mother explaining exactly when he ought to push the boundaries she’s set for him – only when his song feels sure. We never get a moment of Chiro thinking to himself, “my song is sure,” but we do have the sureness threaded into the language throughout the book as Chiro’s self-confidence grows. As a result, his boundary-pushing is not only with permission, but it feels entirely organic for the character.

There are few books in our collection that have been read as often as Nightsong, and none of them are in quite as pristine condition. This is simply a beautifully-built book, from the matte soft-touch cover to the weight, glossy pages. It’s especially impressive considering just how soaked in black ink the entire work is. I’d usually expect a book like that to fray and fade, but Nightsong remains just as inky and beautiful as the day we brought it home.

That darkness means these illustrations aren’t particularly bright, although they are high contrast and cheerful. Some kids simply may not warm up to all the black-backgrounded pages. Also, the charm of the book is very much in the richness of the language rather than any particular cleverness of plot, so if you’re not going to give it a spirited read I could imagine it falling a bit flat.

Ari Beck and Loren Long have created a flawless, timeless classic in Nightsong that is so enduring that my child talks about Chiro even when the book is safely shelved away. It is one of my go-to gifts for babies and toddlers.