After that lengthy comedy of errors (sans the comedy), Dr. Seuss returned with another lengthy prose tale of royalty with The King’s Stilts. I despaired of reading this one with EV after her lack of interest in 500 Hats, and put it off for weeks. Finally, during one of her naps, I decided I’d simply read it myself for the review to spare her the boredom.

Since then, I estimate I have read this book another 40 times, at least – an entire waking day’s worth of reading.

I think I can safely say that neither of us are bored by it. 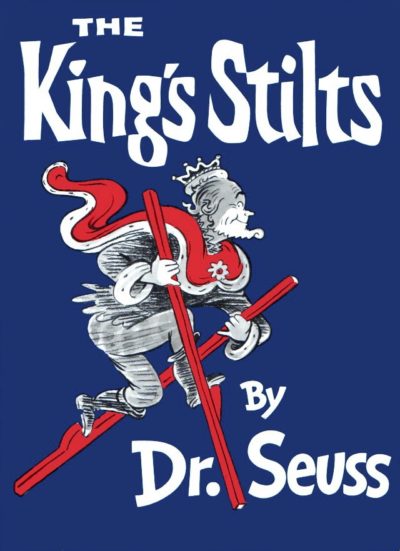 Gender Diversity: All named characters are male; housewives are mentioned and shown, but can’t keep their minds on their housework. However, the main character, Eric, is easily gender-flipped.

Themes to Discuss: monarchy, “business hours” and busyness, work/life balance, predators and prey, conservation, conflicting instructions / when not to obey, lying and the importance of telling the truth, importance of communication

This prose story presents a fanciful story of a kingdom in peril due to one grinch-like goon who hates to see his king have fun. With a young protagonist, a thoroughly evil villain, and a threat that’s all-to-real in our world of global warming, this early Seuss book really holds up for modern readers!

That’s especially true for parents engaged in demanding jobs, since the central theme of the king’s stupor is that someone has taken away his work/life balance.

Right from the start, The King’s Stilts has more of Dr. Seuss’s characteristic whimsy than 500 Hats. King Birtram spends his days occupied with rather whimsical busywork that makes him the most industrious of all kings, although it’s hard to understand how he can have so many important decrees to sign each day!

Things get only more fanciful from there, with the king presiding over the changing of the guard of furious and clever Patrol Cats who hunt the dastardly Nizzards that threaten to plunge his kingdom below sea level by nibbling away the roots of Dike Trees. He then spends the day inspected as many Dike Trees as he can before five o’clock, when he races back home to grab his favorite pair of stilts. 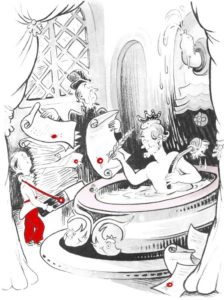 We also get the perfect antagonist to a cheerful and dutiful king in the shape of the officious Lord Droon. Droon is an early Grinch prototype, a nobleman with nothing noble about him who proclaims, “Laughing spoils the shape of the face.” Lest you think he’s championing an ahead-of-its-time anti-wrinkle platform, he continues, “The lines at the corners of the mouth should go down.”

Lord Droon conspires to not only do away with the stilts (via the actions of the unwilling young Page Eric), but to convince the king it was his own subjects who stole the source of his fun so they would no longer suffer under the rule of an undignified king.

This leads to a terrific adventure for Eric, who is brave and capable in his mission to cheer up the kingdom and save the king. His efforts lead to an epic confrontation between King Birtram and the Patrol Cats versus the assembled Nizzards and the elemental force of the ocean! This single page is at once so epic and hilarious that I cannot help but giggle the entire time I’m looking at it. It’s truly one of Seuss’s best.

Beyond being an enjoyable read, what I loved most about The King’s Stilts is the careful balance of two key themes – duty versus play and conservation taking intent and action.

Despite being written in 1938, King’s Stilts serves as a perfect allegory for the importance of work/life balance and having passion for both. At the start we see a king who is the busiest of all kings. While you might argue that some of that business is busyness for the sake of busyness, there’s no arguing how committed the king is to his duties. However, that commitment can only occur if the king gets in some quality stilts-time wandering his kingdom. A lack of stilts sends him into a depression, even though he has the same amount of free time and the same important kingly duties. He has lost half of his passion, and without it the other half seems lacking. 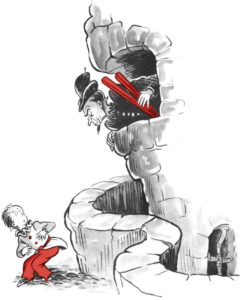 (Also, don’t lose sight of the fact that this is a king who sees his position as a duty rather than an excuse for laziness or petulance. Sure, his work is as whimsical as his play, but it’s refreshing to read a children’s book about a committed member of the royalty.)

With a lack of attention from the king, we see his idyllic kingdom sharply decline in a series of cause and effect events. We go from uninspired cats to rising floodwaters and a scared populace who also cannot maintain their productivity. By placing the fate of the Dike Trees in the middle of this chain of events, Dr. Seuss emphasizes that our environment is not the first or last thing we must consider, but part of a spectrum of needs that keeps us happy and healthy. It’s a theme he’d return to more pointedly and with more whimsy, but it’s particularly effective here.

Also, Droon is one of Seuss’s better villains. He’s so over-the-top that he’d do some moustache-twirling if it wasn’t shamefully gleeful and smile-making. It makes Droon more readable (and laughable) when he gets ridiculous bits of business like being unable to hide the stilts under his cloak. 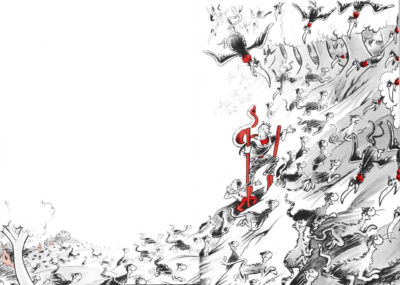 Despite nearly matching the length of 500 Hats, the prose in Stilts passes much more quickly while reading. Perhaps that’s down to the larger and more fanciful illustrations. Seuss repeats the spot-color red from 500 Hats, but here the color is used more liberally as a highlight. It’s the color of the stilts, but also of the Nizzards’ frilly necks and the Patrol Cats’ badges. Almost every major theme of the book gets a dash of red.

While it doesn’t exactly end with a moral, this story closes with everyone getting their due in a way that 500 Hats lacked, which adds to the satisfaction of the silly, high-stakes story.

(Plus, you can introduce your children to the “kid on stilts in an overcoat” trope!)

Dr. Seuss’s next book was the not-really-for-children The Seven Lady Godivas, which has not been printed for decades! Thus, I’ll be back next Wednesday with the Dr. Seuss’s fourth book for children (and, his first true franchise), Horton Hatches the Egg!