Dr. Seuss’s second children’s book was The 500 Hats of Bartholomew Cubbins. This happened to the be the first one we acquired from the library for our reading.

Let’s just say, EV was a bit averse to Dr. Seuss for a few weeks after this one… 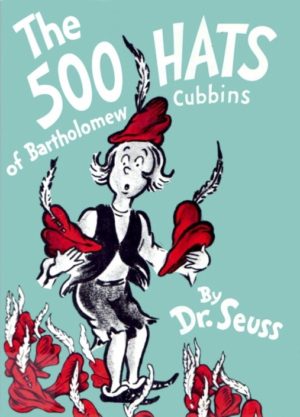 Gender Diversity: Every named character is male, as likely are all who are depicted. “Lords and ladies” are mentioned.

The 500 Hats of Bartholomew Cubbins is an allegory without a moral … with a touch of shocking violence! It’s a long slog of a read for even the most attentive toddler, making it a Dr. Seuss book you can most definitely skip.

500 Hats is written in prose rather than meter. In fact, it’s more a novella than a picture book at its length of over 3,500 words! Each page contains multiple paragraphs of copy and while the language is cleverly written it includes none of Seuss’s typical word play.

The story is of a poor, young peasant of the Kingdom of Didd named Bartholomew, who had a single treasured hat handed down to him from his father’s father. It wasn’t a fancy hat – in fact, it was quite plain save for the single feather stuck upon it that always pointed straight up in the air – presumably due to being so caked with generations of grime.

Bartholomew is on the way to sell cranberries from his family bog at the market when his walk is interrupted by the King Derwin’s royal procession through town. The King is mightily offended to see that Bartholomew had not whipped off his hat in an act of respect and supplication, and stops to command him to remove it 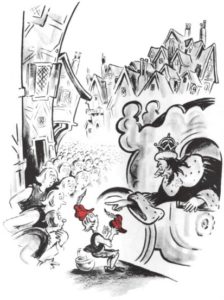 … except, he did take off his hat, only to find an identical one beneath it!

Thus begins the central hijinks of this tale. You know how they say funny things happen in threes? Well, we see Bartholomew try to take off his hat a lot more than three times – though sometimes he’ll go through several at once to save us from watching it happen 500 times. This is part of what’s so wearying about this book that causes EV to quickly lose interest in it. The same thing happens again and again, and while different people get progressively more angry about it (sometimes in mildly amusing sub-groupings of threes), there’s really not much entertainment to be derived.

That’s especially the case when it comes to the young Grand Duke Wilfred, who is like the mean-spirited Draco Malfoy to Bartholomew’s Ron. Wilfred is rather violent – his first attempt at hat-removing comes in the form of target practice with a bow and arrow, and later involves throwing Bartholomew off of the highest tower! He’s also a bit of a brat, yelling “it’s not fair” and throwing several tantrums.

(EV isn’t much for rough play, but if you do read this to your kids you might need to keep an eye on their subsequent target practice and Marie Antionette-themed pretend play.) 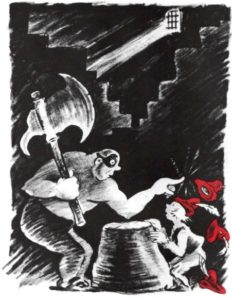 While it doesn’t make for a very enjoyable read, 500 Hats is distinct from the grounded Mulberry Street and it introduces a pair ongoing Seussian themes – fantastical kingdoms and impossible physics. A few of the supporting characters are memorable in that silly Seuss way, such as a friendly, hesitant executioner and matter-of-fact advisor Sir Alaric, who would be played for many laughs in a screen adaptation.

All of the illustrations are black and white save for the the hats, which are a bold red. Not even the king’s regalia merits a dash of color. This emphasizes how increasingly covetous he is of the otherwise plain hat, but also sends the subtle message that any common thing can be the most-important thing to you – not only things that are valuable.

Seuss sets the tone early for the physical and metaphorical distance between King Derwin and the Cubbins family, narrating the stretch of increasingly meager houses that stretched from one to the other. The view makes Derwin feel might and Bartholomew feel small.

That theme of haves and have-nots is heavy for a little kid, but its still effective if you modernize it to be about looking from the highest skyscraper down to the smaller, flatter ranchers that might lie farther out from the center of a city. From that perspective, kids might appreciate that the view is truly the same no matter which side of it you occupy. 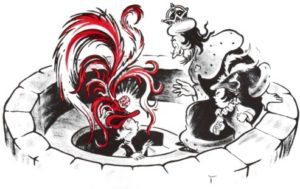 Early in the caper, young Cubbins thinks to himself, “I really haven’t done anything wrong. It would be cowardly to be afraid.” This is a good message, but it’s not reinforced very well by the story, where no one seems willing to listen to our protagonist and the threats do become rather scary.

The moral is merely that things “happened to happen” and no one learns a thing! The king gets a fancy hat, Bartholomew gets rich for no reason, and Grand Duke Wilfred presumably slinks off to sulk somewhere.

Without many laughs or a good moral, and with the undertow of execution, I can’t recommend The 500 Hats of Bartholomew Cubbins for anything but an academic reading.

I’ll be back next Wednesday with the Dr. Seuss’s third book for children, The King’s Stilts!