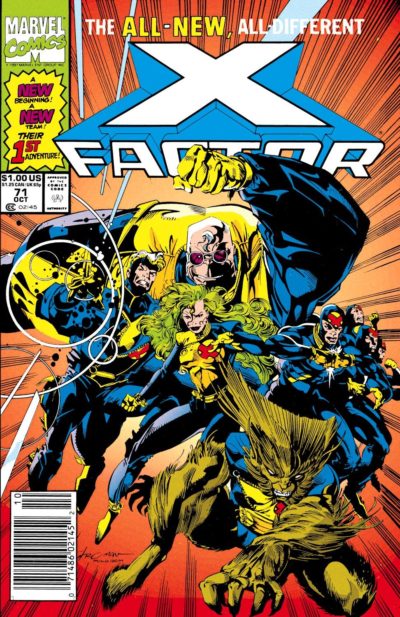 I’ve read this run several times, and along with many voters on Tigereyes’ secret ballot I would say it’s amongst my favorites. Yet, at the time in 1991, the announcement of this cast and creative team supplanting the original five X-Men largely written by Louise Simonson in X-Factor drew a reaction more like “Uh, I guess it could work?” 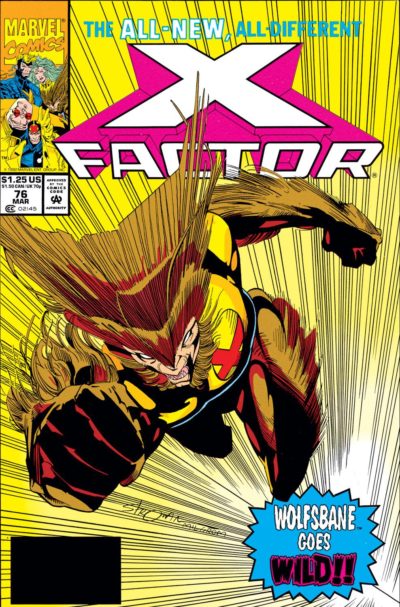 Peter A. David was hot at this point thanks to his run on Incredible Hulk, and he had touched the mutant realm with a brief run on Wolverine (both of which we’ll be seeing later in the results). However, he wasn’t known for team books or working with unknown or little-liked characters.

Larry Stroman was barely known at all, having penciled Alien Legion for Marvel’s creator-owned imprint, Epic Comics. His wide, broad-nosed faces could merit some comparison to Walter Simonson, but on the whole he felt like something closer to Mike Mignola. Stroman’s figures shared Mignola’s simplicity. Both men slightly bend the proportions of their characters if it yields more-striking compositions.

And the team… to say it was a team of rejects doesn’t even begin to cover it.

Havok and Polaris were well-known to X-Fans, but had a limited track record as stars. Havok was featured in Uncanny for about thirty issues from 220-250 before the team completely unravelled, and later showed up as a brainwashed villain in Genosha. Polaris had only ever been a regular character in any comic for four issues at a time, despite having been around for 25 years.

Strong Guy was a former body guard to Lila Cheney who began as a one-note joke, and he had barely been in a half-dozen issues Multiple Man starred as a supporting player back in the classic Proteus story that preceded the Dark Phoenix Saga, but since then was only really in the Fallen Angels mini-series.

Wolfsbane had the most recent appearances of everyone, but also had the distinction of being one of the New Mutants too childish and lame to qualify for X-Force. And even Quicksilver – by far the most famous of the characters – hadn’t been up to much in the past few years beyond a brief run of Avengers West Coast.

X-Factor #71 changed the profiles of both creators and all of the characters therein. The only super things that happens in the course of the issue is the team battling to open a jar of mayonnaise. David twists the concept of a superhero comic by revealing the desires and fears of this government team who don’t seem to care about heroism in the slightest, save for perhaps Havok. PAD subverted the slapstick funniness of Multiple Man to play it instead as pathos, quickly turning him into such a fan favorite that readers flocked right back to him 15 years later in David’s next incarnation of X-Factor. 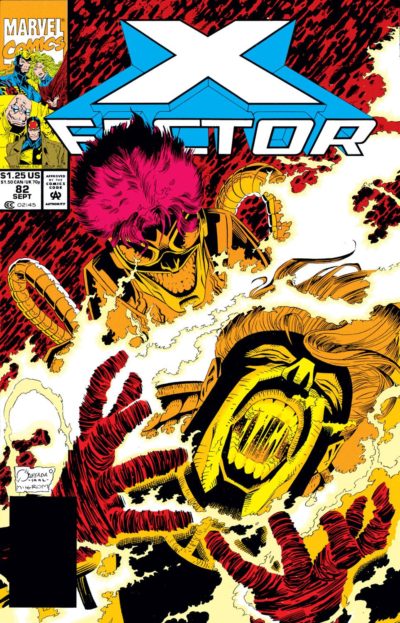 X-Factor were more like a dysfunctional family than a super team, with more in common with Roseanne, Married with Children, or The Simpsons than with the X-Men or X-Force (which made for some awkward beats in the editorially-enforced crossover that came a year into this run).

Of course, PAD could handle action beats, too! But, some of the most memorable moments in this run were Mr. Sinister monologuing to his Nasty Boys and the team facing off one-by-one against their psychologist.

Peter David wrote X-Factor for 20 issues starting with #70 (which was in the X-Men by Claremont/Lee Omnibus, Vol. 2  as the epilogue to “Muir Island Saga”), first with Stroman on art and later with an ultra-hot Joe Quesada.

That run was interrupted for three issues for X-Cutioner’s Song at #84-86 (already collected in oversized format and useless without its accompanying crossover issues) before cutting off in the middle of a story when he left the book after #89 (and an existing Fatal Attractions oversize hardcover already covers #87-92).

That means if we really wanted to stick to this book being exclusively “by Peter David” we’re talking about an omnibus for the 13 non-OHC issues of #71-83 & Annual 8. And, all of these issues have been reprinted in color already in an old paperback series called X-Factor Visionaries – Peter David.

After two issues of coverage by utility X-scribe Scott Lobdell to steer into the big “Fatal Attractions” crossover, Marvel veteran J.M. DeMatteis took over for the remainder of the run beginning with #93, co-writing with both Lobdell and Todd Dezago, who stuck around through #111. 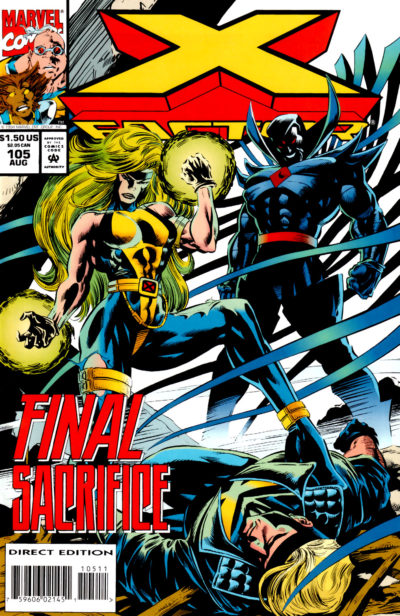 While most of the X-books make the most sense to break just before Age of Apocalypse (issue #111), in this case the better breaking point is #105-106. That provides some resolve to the story of the PAD team – and to especially the arc of Multiple Man.

The book begins to feature Mystique as a main character in #108, which demarcates a change in direction for the final three years of the book despite it featuring some of PAD’s cast through its 1998 finale.

Will we see this omnibus in 2018? Signs point to “no,” but there’s an outside chance.

This run is so tangled up with how Marvel will be handling other 90s era X-Men reprints, and they’re just now getting to more-definitive coverage of X-Force due to upcoming Fox movies.

The one slight possibility is that Fox’s new X-Men TV show is said to feature Polaris, and there’s simply not a lot of material that includes here out there other than her Austen/Milligan insanity era. If she’s a big character on the show, X-Factor would be the best way to support her with a collected edition.

However, I think that’s more likely to yield a second X-Factor Epic Collection than an Omnibus.

Would I recommend buying it? Absolutely yes. David’s run is still great comics, and DeMatteis was a fine steward of the remaining Multiple Man plot threads.