It’s time to don your armor, because I’m back with another weekly review of Dungeons & Dragons and 5e-Compatible projects on Kickstarter – including the very ooky Midnight Ball and GrymWyrd Tales!

I’ve now covered every D&D project on Kickstarter for a whole month. In that time, I’ve figured out some things – including that it’s no fun to scour a campaign page only to discover it’s poorly-planned, badly-edited, unreadable in layout, or even covertly racist – and to then write about it.

I don’t want to punch down on first-time creators or highlight creators whose work I’d never endorse.

Starting with this post, I’m no longer reviewing every new project on Kickstarter each week – only the ones that look interesting to me or that I think are worth recommending!

This week there’s just five new projects, of which I review three below:

Also new on Kickstarter this week are:

For projects with a scope that extends beyond being a single adventure or specific topic like “wands”, I review them based on the 9-point criteria I established in “What makes a good Dungeons & Dragons 5th Edition official release or 5e-Compatible supplement?”

Do you have an upcoming 5e-Compatible Kickstarter project? I’d be happy to check out your sample pages, give you comments on your planned campaign page, or highlight your project in a future post. Just leave me a comment below or reach out to me @CrushingComics on Twitter. 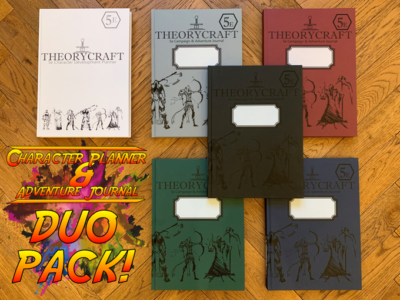 What is it? This project describes itself as, “DUO PACK: Track your Adventures & Plan your Character’s Development with these epic hardback books specifically designed for D&D 5e!”

Should You Pledge? I think campaigns for character sheets and journals always need an angle, because they are competing with free-to-use print-outs and cheap digital tools. The angle of this campaign is that the books are solid, hardcover tomes that not only allow you to jot down your character notes, but keep them on your shelf in an attractive format next to your D&D books. 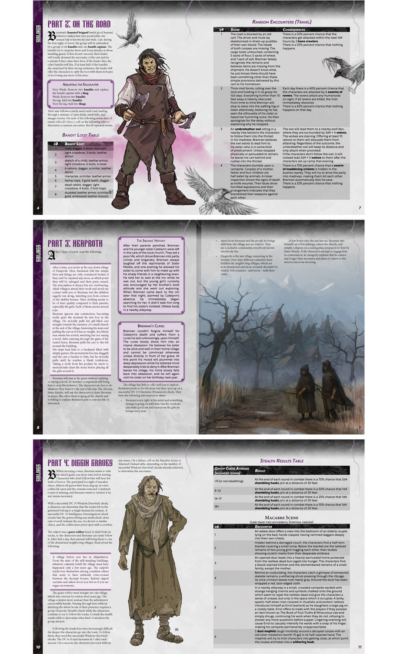 What is it?GrymWyrd Tales – Volume 1: Siblings describes itself as a 12-24 page scenario that is “Part one in an anthology series of dark & strange horror adventure scenarios inspired by old-school gaming and designed for 5E.”

Notable Pledge Levels: $4 for a PDF digital copy; $10 to include a previously-published “Volume 0” adventure.

Should You Pledge? Do your campaigns like to trend a little more violent and scary than the official D&D content is willing to go? If all of your players consent to that sort of thing, typically you’re left to your own devices to dream it up.

That’s exactly what GrymWyrd Tales offers, in the form of a 4-6 hour scenario for characters Level 1-4. Thes campaign promises, “drug use, coarse language, and graphic illustrations of body horror and violence” and other mature themes that the official book shy away from. The sample layout pages look terrific as does the artwork. I think if this sort of thing would resonate with your group, $4 is a reasonable price to pay for the quality they’re showing off in the campaign. 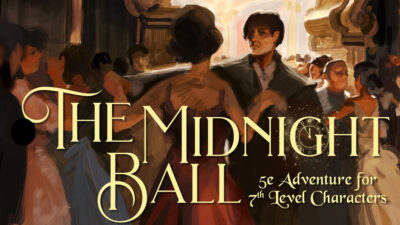 What is it? The Midnight Ball tersely describes itself as “Recommended for experienced Dungeon Masters.” It’s a roleplay-heavy locked mansion mystery for 7th level characters where the mansion is the mystery.

I thought I had missed this campaign in previous weeks because it is ending so soon, but it’s simply a short, 12-day campaign.

Should You Pledge? I have to confess, this adventure pushes ALL of my buttons as both a player and a DM. Mansion mysteries are one of my favorite genres of stories, and having attempted one for my party last year I know how difficult they can be to engineer! Also, I love RP-heavy adventures (as does my group) and the creepy, macabre vibe that haunts the background of this project.

Creator Stephen Hart notes, “the last campaign run by The Grinning Frog fulfilled it’s digital rewards within 2 hours of the campaign closing,” and which this one isn’t planned to deliver quite as quickly it sounds like there will be no question of receiving it soon. I recognize several of his past projects as stuff I’ve been meaning to browse, so I took the plunge on this one (even if the group I DM is about to level out of it).