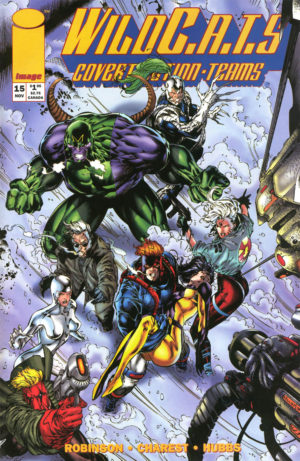 So, you’ll understand my trepidation about today’s read when I remind you that of WildCATs #15-19, Jim Lee contributes only to #19, and then only the layouts with Richard Bennett on finishes. What I had forgotten about these issues was who took over for Lee and his BFF Brandon Choi on scripts – Travis Charest on art, with James Robinson scripting.

Robinson is the obvious good sign. While we didn’t know it at the time, he had begun something truly historic the month WildCATs #15 was released … and it wasn’t WildCATs! Robinson also began his legendary, Eisner-nominated, 80-issue run on DC’s Starman the same month. Since then he’s become well-known as a sort of historian archeological scripter, a writer who will dig through all the layers of a character’s lengthy history to find the bones that fit together best into a new story. 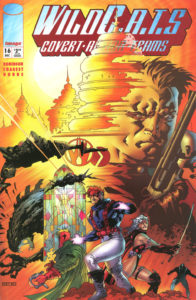 We last saw Charest on WildCATs #0, Special, and back-ups on #8-9, where he was a reliable Lee clone. In the year that elapsed he must have been pricked with a radioactive pencil or something, because his artwork here is something else entirely. It’s the first time so far I’ve opened up a WildStorm book and felt it was not just exciting or dynamic or challenging, but beautiful.

Charest’s pencils with inker Troy Hubbs are so far ahead of their time for 1994, made all the more remarkable by what colorist Joe Chiodo was achieving with 90s technology. I’d hold up the quality of the art in these issues to peak John Cassaday or Travel Foreman. They’re that good. There’s a certain stained glass quality to his figures work, where it feels like he’s defined each distinct plain of their features while still keeping them round and dynamic.

(Since then, he’s become even more remarkable – check out his website!)

The combined powers of Robinson, Charest, Hubbs, and Chiodo pull WildCATs out of the middle of the pack of Image books and makes it a proper must-read. Part of Robinson’s method of doing that is zooming out from the team for his first arc (and also taking Voodoo off the table until he has the chance to do some repairs). His first arc is told from the point of view of a random Black Razor who had his knee shot out by Jacob Marlowe back in issue #2. Now he’s leading the Razors in lieu of Lynch (which places this just after Gen13) and his first mission is to protect the man who nearly crippled him. 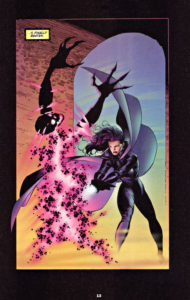 Seeing Marlowe and his team of lethal, unleashed warriors through the eyes of the humans who have to keep them contained completely changes the nature of this book. Finally, Warblade and Maul seem powerful and fantastical. Zealot, despite being a whirlwind of blades and death, seems more human and fallible when we’re not relying on her to save the day as a necessary function of the plot.

Then, Charest takes center stage with a puzzle of a structure from Robinson on issue #17, expanding three branching stories symmetrically first in vertical slices on the same page, then in single page splashes, and finally in full page spreads.

Finally, Robinson gets out his archeologist tools and goes to work on Voodoo – and, to an extent, Void. Much as WildCATs Trilogy made Zealot a dynamic character through defining her history, Robinson makes Voodoo’s sudden dedication to being a fighter real and grounded in a psychic dream sequence that explains that she is not only part Kherubim, but also part Daemonite – maybe the only person on Earth who can claim such a lineage!

It’s phenomenal stuff, especially since Robinson plays to Charest’s best strengths and uses issue #18 (and parts of #17) as a series of pinups. It’s unfortunate to see the legs get swept out from under it so soon with the end of #19 leading directly into the WildStorm Rising crossover. I know all good fiction is about interrupting the “Status Quo,” but when it comes to comic books it’s disappointing to get only five or six great issues before an event shakes things up.

Want the full details? Keep reading for a deeper breakdown of the plot. Here’s the schedule for the rest of this month’s WildStorm re-read. Tomorrow we nip over to Wetworks #4-7 (which occur before this arc!) before a second dose of WildCATs with Warblade: Endangered Species (1995) #1-4 & Grifter: One Shot (1995) (plus the WildStorm Rarities Maul story I originally planned to cover today).