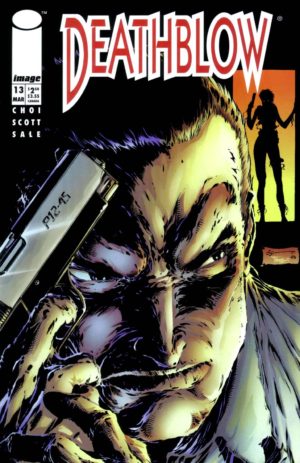 Thanks to a brief tag with the time-traveling Timespan on issue #16 that loops back to his prologue in issue #9, it seems we’re meant to read this post’s issues and the prior one’s in a single self-affirming swath of doom.

Ron Marz spends this trio of issues delivering two of the kind of globe-trotting adventures we expect from the team, but the international action will be the farthest thing from your mind. That’s because he not only turns up the pressure on Battalion’s impending doom, but takes the time to finally make the equally doomed Diva a more round character (albiet with a lame “I’ll make you a better person” romance with Cannon). 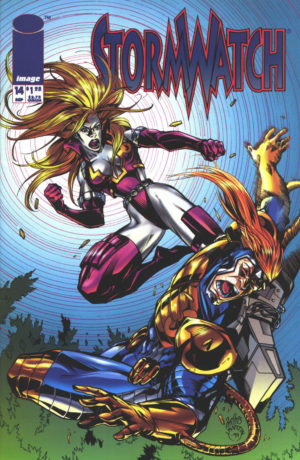 Penciller Mat Broome is joined by Joe Phillips on Stormwatch #14, and combined with a totally new crew on colors it has some awkward moments. It’s a fine issue to work out those kinks, since despite containing some action Ron Marz’s script mostly focused on relationships and mercy.

We quickly learn why Battalion was so eager to take a leave of absence in the last arc. It wasn’t for peace and quiet – it was so he could infiltrate Skywatch and murder his father in his cryo-sleep! As he lurks in the so-called “Ice Box,” we get a glimpse of past foes like Talos, future ones like Stricture, and even some non-threatening figures who must be more than meets the eye. However, he can’t bring himself to kill his father.

We also learn more about the Diva and Cannon romance that has apparently been bubbling under ever since Ron Marz first hinted at it in Stormwatch Special. Their private moment is interrupted when Synergy as Weatherman inserts Stormwatch One into Northern Rwanda to protect refugees from the country’s civil war with strict instructions to engage the enemy only in self defense. 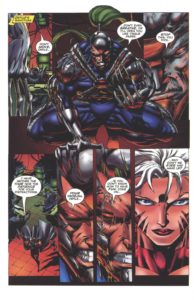 When the team (Cannon, leading Diva, the reconstituted Hellstrike, Fahrenheit, and Strafe) finds that all but one of the refugees have already been slaughtered, Cannon takes it upon himself to hunt down the perpetrators and only Diva can stop him (both with reason and ass-kicking) from killing them in revenge.

The issue ends with a brief stinger in Defiles sanctum, where he’s seemingly threatened by Warblade only to discover it’s a shapeshifter named White. Curiously, he plans to deploy White to disrupt the WildCATs, not Stormwatch. 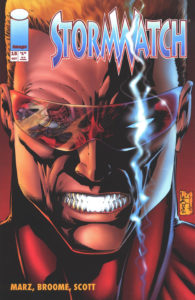 Stormwatch #15 opens with us still in Defile’s lair, and here we learn what he has in store for Stormwatch – a massive genetically engineered creature incubating in a tank.

Synergy the Weatherman (whose hair is already grown out since last issue) has met with all of Stormwatch One to reprimand them for their actions in the last issue – they’re more of the sort of rogue decisions that got her an unwanted promotion. When she gets to Diva, she has only thanks for her leadership, which leads Diva to confront Cannon about his behavior.

Battalion is starting to lose his cool (and his mind?) about his impending death, but his quiet tinkering time in the workshop is interrupted by the always awful Flashpoint. The brash Stormwatch Prime member goals Battalion into a fight and gets thoroughly whupped.

Their confrontation is interrupted by an all-hands on deck notice from Weatherman. A massive humanoid bearing a device that looks like a bomb is in the process of King Kong-ing its way up Mauna Loa in Hawaii – the largest active volcano in the world. Stormwatch One heads in, lead by Battalion and comprised of everyone except the unstable trio of Stormwatch Prime. 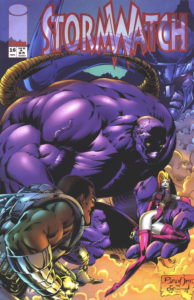 Mat Broome and colorist Steve Firchow have settled in on Stormwatch #16, which makes for a crackling climactic issue. (Weirdly, there is a single page colored flatly without digital gradients, and it looks amazing. It goes to show that Broome’s talent isn’t all in the digital trickery of the coloring.)
The assembled Stormwatch One is unable to dent the massive purple creature sent by Defile despite multiple attacks. Battalion distracts it long enough to get in close and rip the bomb away from where it’s grafted on the creature’s back.

We’ve seen both Hellstrike and Winter contend with massive explosions in recent issues, but Battalion takes it upon himself to absorb this detonation within a bubble of psychic power. Timespan drops by to witness him doing the deed just long enough to stop Diva from interfering. Battalion contains the blast, but his body is left limp and lifeless in its wake.

Artist Trevor Scott stops by to render an epilogue in the past, as Timespan returns to to the unlikely 12th century Normandy for a breather. Despite his seemingly random choice, the fellow traveller we glimpsed back in Gen13 #1/2 catches up to him and says she’ll end his “tampering.”

Ah, is Timestream not as benevolent as he lead us to believe? He slips away after a punishing blast from Nadia to return to his Prologue scene from Stormwatch #9 – which means he whisked Battalion to the future straight from overseeing his death!

Here’s the schedule for the rest of this month’s WildStorm re-read. It’s going to be another tortuous week before we’re back to Stormwatch to see what happens in the wake of Battalion’s death. Tomorrow we break ground on a new series, Backlash #1-4!

Need the issues? You’ll need to purchase single issues – try eBay (#14-16) or Amazon (#14, 15, 16). Since further series reached these same issue numbers, be sure to match your purchase to the cover images in this post.