WildStorm Rising is the first direct crossover between any WildStorm books. Just like here at CK the WildStorm crew doesn’t do anything halfway – their first crossover hits every one of their eight ongoing titles, adding a prologue and a pair of bookends for 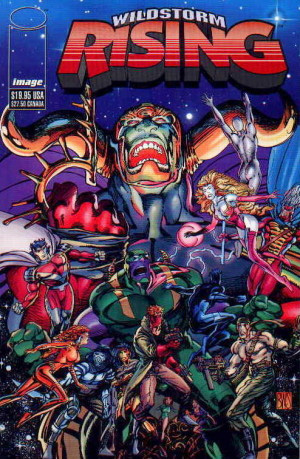 The crossover is really only meaningful to a trio of them – dual flagships WildCATS and Stormwatch, and the debut of Grifter. Everyone else is merely a bystander in the culmination of a year-long plot launched in Stormwatch to alter the struggling status quo in WildCATs.

There are pros and cons to any linewide crossover, and WildStorm Rising is no exception.

On the pro side, the event manages to accomplish something that few Marvel crossovers could manage back in the 90s (and still can’t today): Each chapter worked well as an issue of its own book advancing some of its own themes. That’s despite the fact that many books weren’t written by their typical authors and many of them continued directly to the next title in the crossover sequence.

Plus, we really do get a new status quo for several books, none more so than WildCATs!

On the con side, WildStorm Rising squanders Defile’s long-running infiltration of Stormwatch in favor of him chasing a McGuffin of power just inserted into Team 7: Objective Hell. Many of the pillars of the crossover were built from Defiles machinations, but it still feels like a massive cheat to see his master plot lose steam just as WildCATs and Stormwatch come to blows. He almost literally says, “Screw my plans that have been built up in Stormwatch since issue #6, now I’m going to focus on this other thing.” 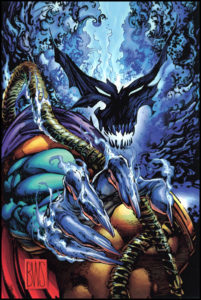 Even worse, it turns out the McGuffin has no real meaning in a hairpin final turn – it was merely a red herring to bring back a fan favorite character squandered too early in the life of the line!

What is this amazing McGuffin? It’s both a key and a symbol. It’s about the balance of power in the ruling class of Daemonites. When they arrived on a space ship chasing the Kherubim, there was a natural division of power between politics, military, and (sort of) transportation. A representative of each held a key to the ship that also signified their unquestionable ruling power. All three would need to align their keys to activate interstellar navigation technology so none could shift the balance of power too far towards government, military might, or (one would imagine) commerce and colonization.

The transportation key was lost in the ship’s crash, which left the political and military arms of the Daemonites stuck in a two-party struggle for planetary power for 2,000 years with no means to escape. Now, the two pieces of the lost key have showed up in possession of a rogue Daemonite and a member of Team 7, and both sides of the Daemonites are racing to collect them – while the assembled might of our heroes try to defend them while resolving their inter-squad squabbles.

Is WildStorm Rising worth a read? As a self-contained event it’s nothing special. However, if you plan to read any other WildStorm books from 1995-1997 – like Grifter’s solo series or Alan Moore’s WildCats – it’s a good primer. It’s far back enough from Ellis’s takeover on Stormwatch to be relevant there.

The rest of this post is split into two sections. The first reviews each issue of the crossover (w/links to purchase) with relatively few comments on plot. The second second offers a plot recap of each issue so you can fill in the gaps of your read.

Want to read the entire thing in one go? All of the material aside from the prologue is collected in a single TPB (Amazon / eBay).